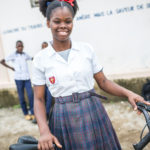 Vastie Jean-Baptiste can now go to school on her own rather than having to depend on her father. “I am a student that is… I study a lot because I have an objective, I want to become something in life, but my father doesn’t have a lot of money. I want to become a diplomat. I want to work in an office and share ideas with others.” 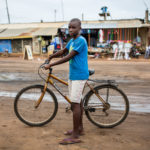 Djalore, 12 years old, pursued school because of his bike. Not only does he now arrive on time in class, but also “since I get home sooner, I have time to learn a lot before going to bed, before I was not able to. At 10 PM, sleep got the best of me! 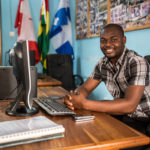 After receiving help himself from an NGO as a child, Mignanou Ayi decided to give back to his community by getting involved in Echo de la Jeunesse as a project leader. “The projects are similar but never the same. I cannot tell you right now that this project moved me more than another, because we are like fathers, and you cannot like a child more than the other.” 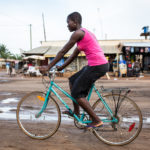 Tem-Komlan wishes to see all her friends get their own bikes! Its because of her shorten commutes to school and back that now, after she’s done with her chores, she has time for herself before going to bed. “I want others to also get a bike to make all their lives easier.”

Faris Salman will use his bike primarily to commute to work rather than taking a taxi. “When I don’t have the bike, I often take a taxi everyday. Transportation before getting to the house, I use almost half of my money.” He plans to use the saved money to enhance his living conditions. 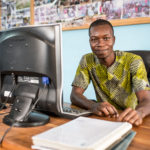 Gbaga Kofi Ayéna is proud to put his university degree to use by helping the community as the general secretary of the NGO Echo de la Jeunesse. “We are specialized in the fields of education, health and environment. We have had to build schools, potable water infrastructures, pulic bathrooms and created hand cleaning programs in schools.” 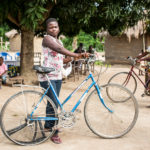 Her bike allows Vodji Abla to help her sick mother by allowing her to run errands in town.

Aimé Klu-Moleme doesn’t have to quit for school at 5h30AM now that she has her bike, which allows her to contribute more to her family life. 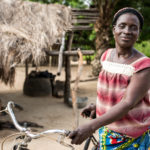 Kpogli, peasant and farmer, uses her bike to multiple purposes. It allows her to make corn floor, an important part of her diet, along with allowing her kid to get to school. “I thank all the partners and everyone that helped me make my dreams come true” 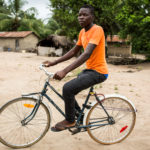 Eklou Atsou: “My bike helped me go back to shcool and work, that is good. I will go to school to become somebody tomorrow.”